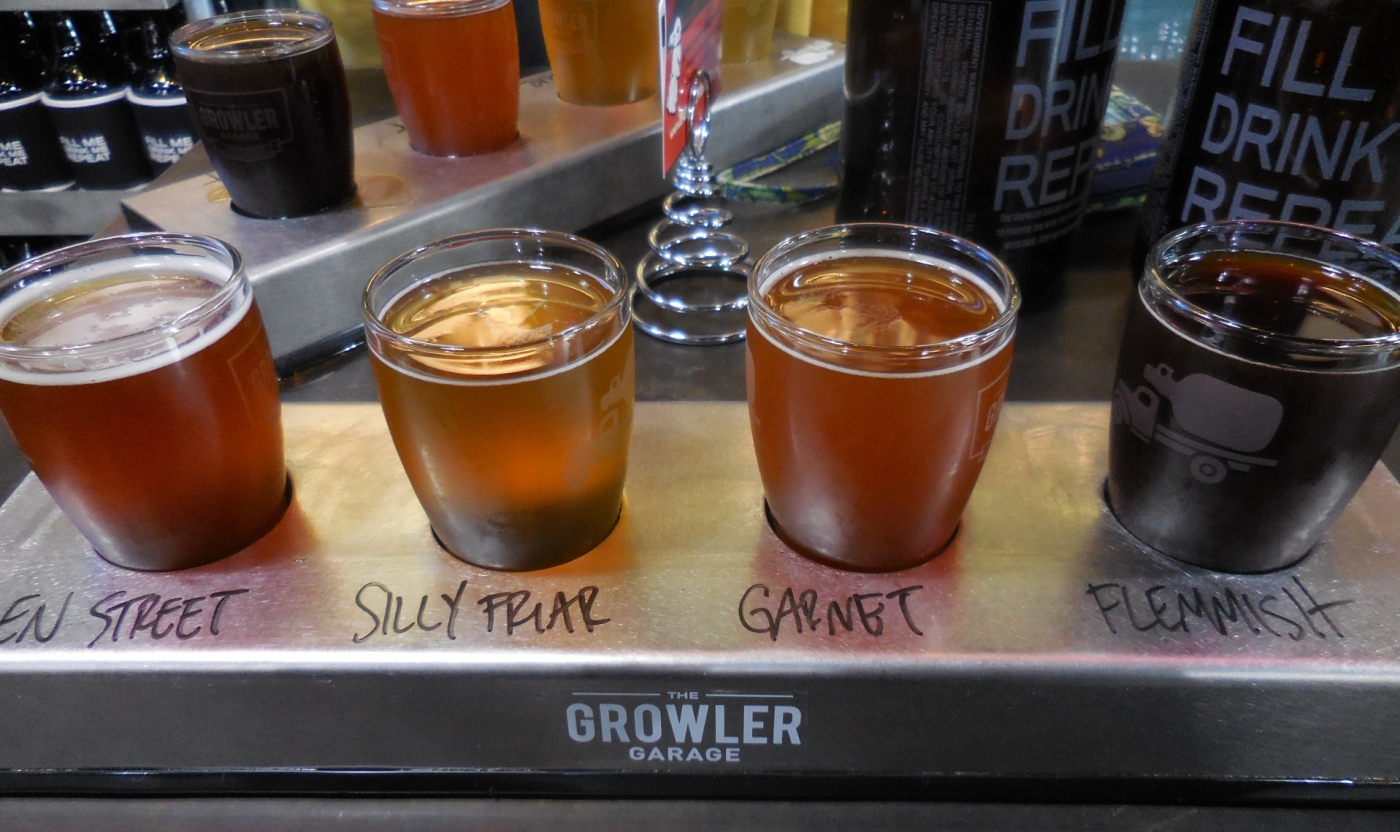 Hermit Thrush Brewing is focusing on Belgian inspired ales and tend to lean towards sour styles. Because of this, we’ve been wanting to try out their beers for a while now. We missed out on their tap takeover at the Farmhouse last month but got another chance the other day. The Growler Garage on Dorset Street in South Burlington had another Hermit Thrush tap takeover on April 10th and as soon as we were done work we went right there. They had five Hermit Thrush beers on tap and one of their brewers, Zach, showed up at 6.

The beers they had were:

From the website: “Brattlebeer is slightly tart, light bodied and dry with both fruity and malty undertones, and rocky, champagne-like head.  Fermented spontaneously with a blend of local apple cider, malt, and hops.”

What we think: It has a very enjoyable Belgian yeast flavor and the effervescent quality of a nice dry cider. It has a sweetness to it but is also slightly funky from the yeast. We got a Howler of this one.

From the website: “We focus on a balance of hop and malt flavors with a citric tang from a few days of kettle souring. It’s not the jolt to your taste buds that our Flemish Sour Brown provides, but it certainly has a powerful, tart presence to support its hoppiness.”

What we think: It has a sweet, almost caramel taste to it and is not overly hoppy. Slightly sour without being overpowering, it has a thick quality to it. When it comes to cans (soon), they are planning on adding some more hops to the recipe.

From the website: “Our enkel (or single) resembles the Belgian pale ales that would often be part of a monk’s lunch and have generally fallen out of favor beyond monastery walls with the proliferation of stronger Trappist styles. Our Silly Friar uses a hefty amount of European and aged hops, but focuses primarily on the malt profile; strong bready and cracker notes give way to a dry, super malty finish with a touch of yeast funk.”

What we think: This beer is light, almost wheaty, and has a great malt flavor. It has a dry quality to it that is refreshing.

From the website: “This amber ale uses a spicy saison yeast and a strong malt structure to highlight bold, spicy hop flavors from local hops accentuated with a hint of New Zealand varieties. The result is a quaffable, hop-forward amber well suited to the turn of the season to warmer days and vanishing snowbanks.”

What we think: This was definitely their hoppiest beer. It smells wonderfully floral and finishes with almost a smoky flavor. We decided that it would go very well with some nice smoked mozzarella. We also got a Howler of this one.

From the website: “The Flemish Sour Brown is an exquisitely tart brown ale in the traditional Flemish style of Belgium. Bold and complex malts help to balance and support the sourness and keep you wanting more once the initial puckering subsides. This is not a beer for the faint of tongue!”

What we think: Their description definitely does this beer justice. Right off the bat is it very sour, but in that great way that only the best sour beers can be. Early sips left me with puckered lips but as I drank more, it seemed to mellow out a bit.

Hermit Thrush is producing some great beers and in styles that are not overly done in Vermont. With only one IPA, and that one being a sour IPA, they are bringing some much needed variety to the market. They have their own canning line and are hoping to start canning soon and distributing around Vermont. For now you can find them on tap at select restaurants.