One day last week, a mysterious box arrived on our doorstep.

(Okay, it didn’t just magically appear. Magic Hat sent us a Twitter message and asked for our address. But whatever.)

What was inside this multicolored marvel?

(Do you even know what this blog is about?)

We decided to dive right in and give these a taste. Here’s what we thought:

Magic Hat’s new summer seasonal was light, crisp, and refreshing with a whisper of ginger. While the flavor wasn’t as intense as my favorite ginger wheat from Foley Brothers, it was the kind of crowd-pleasing beer I’d pick up for a summer party. I feel like I could drink this all throughout a long summer day. Stealin’ Time is available in stores now in 12 oz. bottles (6-packs and 12-packs).

Our Food Pairing: Hot dogs and hamburgers straight off the grill 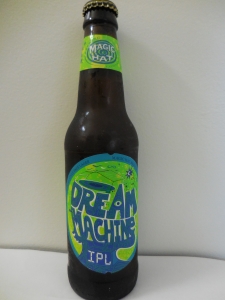 This one isn’t new—Dream Machine, brewed in the emerging India Pale Lager style, was originally released last year. But beginning in May and for a limited time, you’ll be able to pick up Dream Machine in cans.

What did we think of it? With a bitter (too bitter?) finish, little flavor payoff, and a lack of the hoppy flavor I was looking for, I weren’t Dream Machine’s biggest fan. However, I do enjoy the IPL as a style and would absolutely order this in a bar if the craft beer options were limited.

Our Food Pairing: Wood-fired pizza with a spicy-sweet tomato sauce 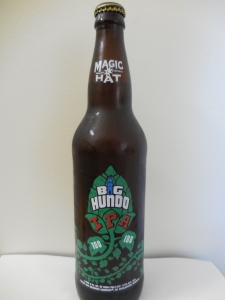 The Big One. This one arrived to us in its own little insulated compartment. Big Hundo, previously only available on draft at select Vermont bars and restaurants, is being released in 22 oz. bottles at select retailers and bottle shops, as well as on draft at top beer bars across the country.

“We wanted to create a really big, bold IPA that hoppy beer drinkers would love. We combined a variety of hops to create big citrus and pine flavors, balanced by some malt sweetness and just a hint of alcohol warmth on the backend. We’re really excited that more beer drinkers will have the opportunity to try it.”

With 100 IBUs, I expected Big Hundo to be overwhelmingly hoppy. I’ll be honest, I’m not a huge hophead, so I was a little nervous to take my first sip. But this beer is actually very well balanced in my opinion. The nose was deliciously juicy and very citrusy. This beer had a full mouthfeel, and I tasted notes of blood orange and ruby red grapefruit. For a beer with such a high alcohol content, it didn’t taste boosey. I was actually more impressed with Big Hundo than I thought I would be.

Our Food Pairing: Barbacoa taco topped with onions and cilantro